Create an Account - Increase your productivity, customize your experience, and engage in information you care about.

Henry Dove brought his family to this fertile area from Virginia in the first years of the 19th century. He was granted the 160-acre quarter section that would become Canal Winchester by the Chillicothe Land Office on October 1, 1811. He began to clear the wooded land, building a log cabin on the site of what is now 15 East Columbus Street. In 1821 (before his death in 1850), Henry Dove divided his land between his sons, Reuben and Jacob. Jacob sold his land to John Coleman in 1824.

When plans brought the canal through Reuben Dove’s wheat field, he wanted to sue the state. The canal workmen convinced him that he would be better off laying out a town since the area was midway between two county seats, Columbus and Lancaster. On November 5, 1828, Reuben Dove and John Coleman recorded the first plat for Winchester, Ohio, in Violet Township, Fairfield County. Dove named the village for his father’s hometown of Winchester, Virginia. That first plat laid out lots along Columbus Street between High and Trine Streets, and along High Street. In 1829, Reuben Dove filed a second plat that laid out lots along East Waterloo Street and along Columbus Street, east of Trine Street.

Winchester flourished because of the twin industries of agriculture and transportation. The rich soil of Violet and Madison Townships allowed the farmers to grow excess grain that could be sold, creating an agriculturally based economy in the area. The Ohio and Erie Canal brought passengers, freight, and a means to transport grain to market. The Village itself developed to provide the goods, services, and social opportunities for the people in the surrounding area. The businesses along High and Waterloo Streets prospered as they met most of the needs of the farmers, their families, and the townspeople.

The first canal boat floated through Winchester in 1831. In the early and mid 19th century, the village had stagecoach service. The railroad came to Canal Winchester in 1869, bringing continued prosperity. In 1904, interurban service brought a public rapid transit system to the Canal Winchester area. Today, U. S Route 33 keeps the area viable.

When the post office was established in 1841, the village name was changed to Canal Winchester since there were five other towns named Winchester in Ohio at the time. The village was annexed into Madison Township, Franklin County, in 1851. On May 31, 1866, the Ohio Secretary of State granted incorporation papers for the Village of Canal Winchester. Unlike some former canal towns, Canal Winchester has continued to grow and prosper. The population in 1850 was 350; in 2000 it was 4,478. 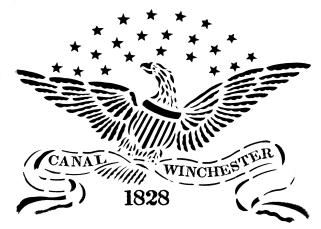